Now that World Youth Day in Brazil has come and gone, some of those who were there are looking back and reflecting on their favorite moments.

For an entire week, Rio de Janeiro was filled with pilgrims who had journeyed to the South American city from across the globe for an encounter with Pope Francis, as well as with the millions of other young people who share their faith.

The celebration culminated with Sunday’s concluding Mass, presided over by Pope Francis on Copacabana beach, which was attended by an estimated 3 million people. As is customary, the pope announced the location of the next WYD during his Sunday Angelus address: Krakow, Poland.

“Everyone seems to be very happy about the fact that WYD is returning to the land of the founder, John Paul II,” said Salt and Light producer Deacon Pedro Guevara-Mann, in an interview with ZENIT. Deacon Guevara-Mann, who has just wrapped up his time in Rio covering the week-long festivities, said WYD 2016 is also significant because it will coincide with the 30th anniversary of the first official WYD in 1986. 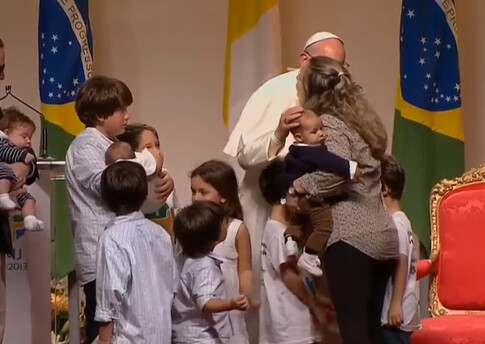 A week in Rio

One of the characteristics of this year’s WYD was the nearly constant rain. Rather than dampening the spirits of the pilgrims, however, Deacon Guevara-Mann said that, in reality, “no one seems to mind.”

“People just got wet,” he said. “At the Papal Welcome Ceremony the Holy Father, referring to ‘cariocos’ or people from Rio de Janeiro, he said that he ‘had always heard that the Cariocas do not like the cold and the rain but you are proving that their faith is stronger than the cold and the rain.'”

The event which set the tone for the week, said Deacon Guevara-Mann, was the Papal welcome ceremony. He noted how the musical presentation, entitled “Rio of Faith,” demonstrated how Brazil is deeply rooted in the Faith. “I’ll always remember when Pope Francis called for an applause to Benedict XVI. He assured us that Pope Benedict was watching on TV.”

Another highlight for Deacon Guevara-Mann’s was Friday’s Way of the Cross, which has become one of the highlights of the WYD tradition. The Stations, he said, were not “dramatic representations: instead, they were non-literal expressions set in Carioca settings. Each was linked to a particular issue that young people face today.”

“All stations were very moving,” he continued: “very simple and touching, and I believe they spoke to young people in a way that the Church does not always speak to them.”

On Saturday, some 3 million people filled Copacabana beach to attend a prayer vigil with Pope Francis. “The vigil was one of the most powerful ones that I’ve ever seen,” Deacon Guevara-Mann said. “The music was perfect and prayerful; everything was just right: music, symbols, witnessing, worship, the Holy Father’s message. It was truly a night when God was worshipped on Copacabana Beach.”

“I’ll never forget [the pope] telling the young people that in order to train we have to pray, go to the Sacraments and be loving to others. He made us all repeat those three and then added, ‘you’re not going to forget, are you? Tomorrow, will you still remember?'”

Throughout the week, and culminating with the Mass, Deacon Guevara-Mann noted how “there was much intellectual growth, but also emotional and spiritual growth. There were many emotional moments, such as the family with the little girl born without a brain, who were invited to bring her up during the Offertory at Mass and also during the Vigil when the man who’d suffered an accident and was left in a wheelchair asked us all to take out the cross from our backpacks and hold it up: ‘pick up your cross.’ It is that Cross that gives us strength.”

“At some point, sometimes during the WYD experience, Christ calls us to stop being merely disciples and sends us as apostles. That was exactly the theme of this WYD, ‘go make disciples of all nations.’ Pope Francis reminded us over and over again to be disciples and also be missionaries. That’s what it’s all about.”